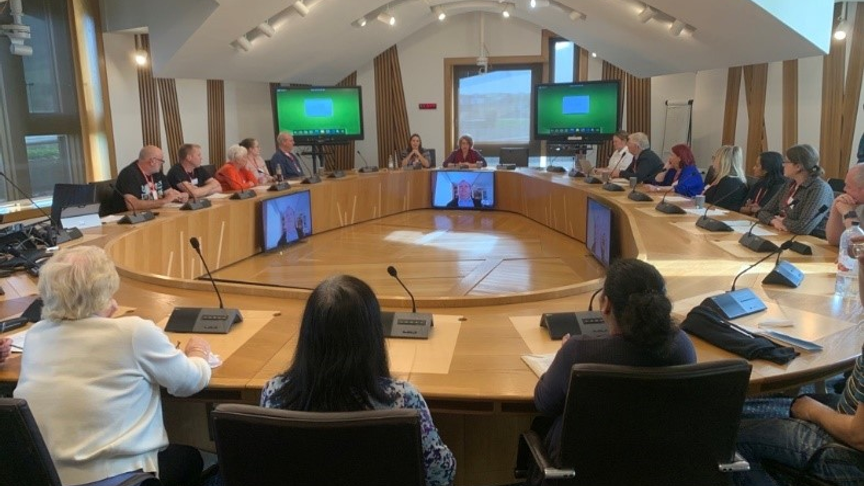 Legislate for Deliberative Democracy in order to ensure that: ⚫ diverse voices and communities from all parts of Scotland influence Scottish Parliament’s work ⚫ the public are consistently informed and consulted on local and national issues In drawing up this legislation the Parliament should: ⚫ recognise that there is not one engagement solution that fits all situations and issues ⚫ design and implement a framework based on this panel’s recommendations for ensuring diverse participation in deliberative democracy. The framework should include: ⚫ An annually recurring citizens’ panel with agenda-setting powers to determine which local and national issues require either national or local people’s panels (e.g., ‘deliberative town halls’) ⚫ Protection for participants to improve participation. We do not agree that participation in panels should be mandatory, but protective elements such as the right to time off work should be included for people who are selected to take part. ⚫ Rules around how MSPs consider and respond to recommendations from people’s panels such as mandatory follow-up to people’s panels’ recommendations no later than 9 months and a response from the Parliament and Government ⚫ Potential for mixed MSP–people panels ⚫ Ability to form local panels with local MSPs with outcomes that are sent up to the national level

Theres no point legislating for something that should already be at the core of what this Parliament does.

Whatever you do - it needs to be simple, otherwise it will be lost in the detail and the impact on community involvement will be minimal. Requiring MSPs to hold a certain number of Community sessions each term to engage face to face in their communities would establish a better two way communication process and will increase community involvement in parliamentary business.

Quite worried about this, 19 people cant speak for Scotland. Different areas have diffrent problems and rural areas are not the same as the central belt or towns. Msp represent different areas, a citizen panel cant. Why not use Community Council input as a the they represent individual communities.

It's a big and expensive idea! Panels would need to be large enough to be representative and selected randomly from the entire population.

Legislate to form a citizens assembly which would be the main body to create policy, then to be implemented by an executive. Membership of the assembly would be by sortition. This action would lead to the euthanasia of partisan politics, puerile point scoring, political parties and policy created by lobby groups. Policy derived from the deliberations of ordinary citizens would better serve the needs of Scots, rather than narrow party ideology.

Something like this is running in Ostbelgien, and generally in Belgium we're seeing a lot of democratic innovation - it would be fantastic to see Scotland picking this up and adapting it to the local context. We've also seen from Ireland that when people understand these kinds of processes to be part of the normal way of making complex decisions that affect everyone, via this kind of institutionalisation, participation levels are very high and responses are positive.

Set up a truly independent organisation to monitor; the influence of lobbyists, both public and privately funded ones, use analytical techniques to demonstrate levels of transparency, community consultation and engagement. The SG civil service and political representatives should be kept at arm's length

A Citizen Assembly, formed by sortition, should be the legislative body, there is no need for any other body, either to oversee or be overseen.

I believe that citizen’s panels are really really important, and should be used a lot more to inform the working of the Scottish Parliament. Having a broad discussion from a wide range of people with no real agenda could provide valuable information on a wide variety of topics. Deliberative democracy will fill in the gaps between elections, but will be more powerful than nothing at all.

There's definitely a role for deliberative democracy/citizen panels in the work of the Scottish Parliament. But we need to think carefully about how this interacts with the principles of representative democracy that the Parliament is based on. If we're going to continue to have elected representatives, we need to have a clear idea about what that process brings to the table versus citizen panels.

This is a very exciting proposal, especially this point: "An annually recurring citizens’ panel with agenda-setting powers" - since to date almost all citizens' assemblies have had their agenda set by others and this would give such a panel much more scope to tackle the issues that elected representatives may shy away from handing to a citizens' panel.