Lease our seabed for energy production by MWh generated 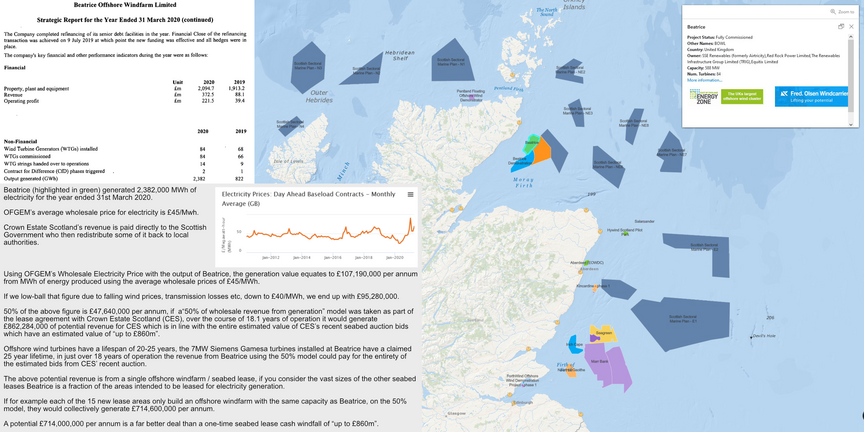 Currently Crown Estate Scotland [CES], which is devolved with all revenue returned to the Scottish Government, are leasing off Scottish seabed areas for £100,000 per square kilometer as a one-off fee to secure the leases, which is a massive loss of potential income given the size and scope of these offshore energy lease sizes. The Scottish Government should instruct CES to change the lease agreements to a revenue based model by laying claim to "50% of the wholesale revenue from energy generated per MWh". The average OfGem price per MWh is around £45/MWh, even with this rounded down to £40/MWh & using the Beatrice Windfarm as an example whose turbines have an expected lifetime of 25 years, this single Windfarm in just over 18 years of operation, using a 50% revenue from generation model, would generate more revenue than the entire recent seabed auction by CES of £860m of one-time revenue from auction. If each of the 15 new seabed leases, which are vastly larger than Beatrice, only construct offshore windfarms with the same capacity as Beatrice, on the 50% revenue from generation model they would collectively generate ~£714,600,000 per annum. A potential £714,600,000 per annum is a far better deal for Scotland than the current one-time seabed cash windfall of "up to £860m". These foriegn energy companies and investment bankers should be paying Scotland per MWh generated, working for us and not stealing our seabed in perpituity for £100,000 per square kilometer for the sheer purpose of making vast profits from Scotlands resources while giving very little back to Scotland. A full size image of the thumbnail for this idea is available here - https://i.imgur.com/Sxm4Mku.png